A Flea in Her Ear

ABOUT THE PLAY
Feydeau’s classic farce is the hilarious new force behind the growing appreciation of this delightful comedy form. It was a smash hit in Paris. “La logique absurde,” as one critic called it, begins when Madame Chandebise decides to entrap her suspected husband by sending him a perfumed letter supposedly from a mysterious female admirer suggesting a rendezvous at the Hotel Pussy Cat. The wife has chosen this improbable meeting place because a package has just come from there addressed to her husband, and when she opens it (by mistake, of course) she discovers his suspenders. Then the confusions, complications, reversals, double roles, and double meanings take off!

This page, when composed, will draw from the Wikipedia article on the History of Western Civilization and its tributary links to explain more clearly the effect events in history have had on theatre (and vice versa) from the end of the Middle Ages to the Industrial Revolution. For now it’s just a brief jumble of notes, but the source is both well-written and enlightening. END_OF_DOCUMENT_TOKEN_TO_BE_REPLACED

(Drafted through the Renaissance)

NOTE: The following essay derives from two primary sources:  Oscar Brockett’s History of the Theatre, acknowledged as definitive, and multitudes of historical links on Wikipedia.

END_OF_DOCUMENT_TOKEN_TO_BE_REPLACED

In the first play, Agamemnon, supreme commander of the Greeks at Troy and scion of the cursed House of Atreus, having sacrificed his daughter, Iphigenia, to Artemis to unfurl the sails of the Thousand Ships, returns home in triumph, only to be slaughtered by his wife, Clytemnestra, in revence. Play Two: Years later, Daddy’s girl, Electra, persuades her brother Orestes to kill Clytemnestra, tit for tat; at which point the ancient Furies—serpent-haired, dog-headed, batwinged daughters of Mother Earth—attack and pursue him into the wild. Play Three: Orestes finds his way to Athens and appeals for relief to the Goddess of Wisdom, who puts the case to judgement before a panel of twelve citizen judges.

The question was the importance of motherhood: Did the murder of one’s father justify matricide? The argument for Orestes, made by Apollo, was that a woman was no more than the inert furrow in which the husbandman casts his seed. When the jury locked at six to six, Athena cast the vote in favor of Orestes, and consoled the Furies by changing them into the kindly Eumenides, goddesses of hearth and home.

Two icons of the western world—Trial By Jury and Patriarchy—instilled in one fell swoop, endorsed by the goddess of wisdom, demonstrated graphically through the course of three violent and disturbing plays. (When the chorus of Furies appeared “in wild disorder in the orchestra,” according to an ancient account, they “so terrified the crowd that children died and women suffered miscarriage.”)

Aeschylus was one of only five Greek playwrights whose works we know today; of his eighty plays, only ten (counting Achilles) remain. Writing in the early days of the Athenian Democracy, his tragedies are “of the gods,” while those of Sophocles (seven of 120, including Oedipus), thirty years his junior, are “of heroes,” and Euripides (19 of 90), fifteen years younger still, “of men”—perhaps because, during their overlapping lives, Athens first achieved the Golden Age and then, one year after the deaths of Sophocles and Euripides, lost the Peloponnesian Wars. All three told the same familiar stories (Electra, for example). Aeschylus, however, dealt with epic themes, reflecting the confidence and vigor of a powerful state; Sophocles, a young man when the wars began, focused on heroic choice, civic duty, responsibility. Euripides depicted human failure, exposing people as perverse, irrational, self-serving, decadent.

The fourth playwright was Aristophanes, younger even still by 35 years but competing in the same contests, writing Old Comedy that ridiculed the war, among other things, and people—including Socrates, who knew them all.

The fifth, Menander (only one—The Grouch—of over 100), was born a half century after all the rest were dead. By then, Alexander the Great ruled Greece. The Golden Age was history, freedom of expression had been repressed, religion was a joke, and what theatre remained—although now secular, professional, and widespread—second-rate melodrama modeled on Euripides and New Comedy, innocuous and bland, sitcom. Typical plots revolve around stock characters (young lovers, lechers, miserly old men, clever wives and servants, concubines, clowns) and involve sex, greed, gluttony, and mistaken identity.

So it was that when when Rome conquered the known world, its playwrights imitated not the greats, but Menander and his ilk. Seneca rewrote Greek myths with Roman gods; Plautus and Terence copied The Grouch. While their plays are trivial compared to the Big Four, they served to inspire the Renaissance, and deserve that credit.

All creative writing is divided
into three primary genres:
Poetry, Prose, and Drama.
Poetry is omnipresent
in the lyrics of our songs;
prose is virtually everything else we read, write, hear, and speak.
Drama is poetry or prose (or both), and written to be played;
but we don’t go to plays.
Unless we read them,

[Yes, we know movies and TV,
but they’re not real—they’re moving pictures.
Are they literary? Arguably,
but the focus is on the image.] END_OF_DOCUMENT_TOKEN_TO_BE_REPLACED 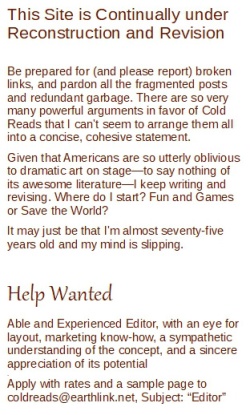 Proud to be Recognized by 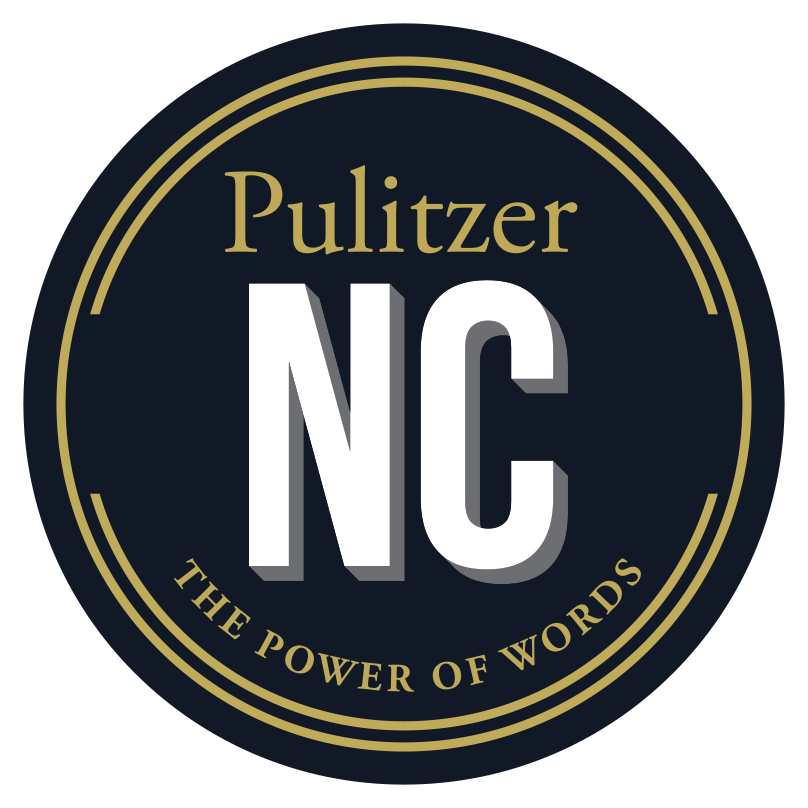