Cold Reads International (CR/I)  is—potentially—a world-wide pool of ordinary people (including you) whose only common bond (aside from being human) is that we like to gather in small groups to read stage plays, aloud, without rehearsing (“cold”), for no one but ourselves (no audience). For fun, if nothing else. (There’s so much else.)

is to persuade the world that reading plays with friends is surprisingly enjoyable and immensely rewarding in a lot of different ways, leading them to join (or form) local groups united under CR/I to lobby for universal recognition.

is a world in which most ordinary people are not only regular cold readers, but also frequent patrons of (and participants in) a revived and thriving theatre, live on stage—for the sake of humankind.

It starts with just two people reading a 10-minute play over coffee. It’s fun, so they do it again. And again. It gets to be a habit. They do it with other people, who do the same. It spreads like wildfire. Some start reading longer plays, discover that dramatic art is literature, and form groups that gather regularly—like book clubs, only better.

The role of CR/I is to promote and facilitate cold reads wherever there’s a spark of interest. We reach out to readers, encourage them to join (or form) local groups, invite them to become part of our world-wide mission to make reading plays with friends an international pastime.

As this grassroots movement grows, it creeps into the culture. Schools incorporate it into their curricula, not only as dramatic literature (at last, along with poetry and prose), but to improve reading and speaking skills, spark imagination, inspire creativity—reading aloud is good for the brain!

At some point, it gets to be more than our tiny staff and free (limited) WordPress blog can handle, and some benevolent foundation (or progressive government)—recognizing the value of Cold Reads to its constituency and the world at large—funds an institution to promote it to the masses. (Hopefully this happens before some corporate sleazeball finds a way to make it pay). In time it becomes our most popular national (world) pastime.

By this time CR/I’s irrelevant.

Meanwhile, cold readers lead an even greater movement to bring plays back to the stage, with better productions and cheaper seats, where ordinary people find they get more out of theatre than most other things they do. New companies spring up like clover, with well-paid, professional talent, rivaling, then overwhelming sports and other less fulfilling pastimes. (Football is SO Last Millennium.)

The argument from there to how Cold Reads might save the world appears in Salvation.

Our Past and Present State

The first (and so far only) local affiliate is Cold Reads/Charlotte, the prototype for the movement, formed in 2008 by me, George Gray, and over the next dozen years read nearly 400 plays with any three or four to a dozen of its 250 members. other people (see Our History). I created this blog in 2014 to encourage other groups, but it’s attracted no attention: so far barely a handful of anonymous individuals has joined, not one of whom has published a post. It’s a puzzlement.

That said, I still believe the game makes sense, for all the reasons I put forth, and long to find like minds who’ll help me make it happen (see Our People).

Surely for all of us cooped up at home, a Cold Read online offers both escape from fear and boredom and face-to-digital-face communion with other human beings.

2 thoughts on “About Us”

Reading Plays with Friends for Fun and Cultural Enrichment 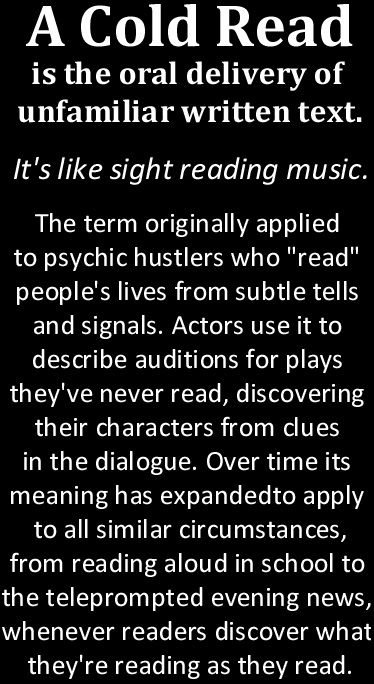